When used in India, the Kala pani reference is often associated with the cellular jail in Port Blair where freedom fighters were sent. When used in the diaspora, it refers to the large scale migration out of India in the 1830s when hundreds of thousands of Indians, both willingly and unwillingly, left the subcontinent and crossed the Kala pani (the ‘black waters,’ the ‘forbidden’ sea between India and the Americas) to work in the sugar colonies as indentured labourers, or bound coolies, not only in the British Empire but also in the French, Danish and Dutch colonies. These emigrants were responding to the need for labour on the plantations after African enslavement was legally abolished in 1834 and fully terminated in 1838. Some 1.25 million emigrants were taken to Fiji and Mauritius, as well as the British, French and Dutch Caribbean. Indians were also recruited later in the 19th and early 20th centuries to work in South and East Africa on the railways and in other industries, going mainly to Kenya, Uganda and Tanzania. This migration has gained detailed records because of MK Gandhi’s involvement with indentured labourers in Natal in the late 1890s.

Even if this history of the crossing of the Kala pani towards African and American shores, of the ensuing creolization and of the literature and the arts that have emerged out of it has been well researched for several decades, it has been so mostly from the diasporic point of view of the countries the indentured labourers went to and settled in. It has not been a focus of interest in India itself, it is not well known by the general public, it is not part of the school or university curriculum, it is not part of the diaspora festivals in India, few academics based in India or in South Asia research it or write about it from the perspective of India, only a few have studied the return migrations, hardly any writers, filmmakers or artists have explored the complexities of the Kala pani, etc.

A series of academic events, seminars, symposia and conferences is starting in 2019 and means to throw more light on the history and the literature of the Kala pani from the Indian perspective, going against the notion, held by some, that revisiting the Kala pani would be distorting Indian historiography. 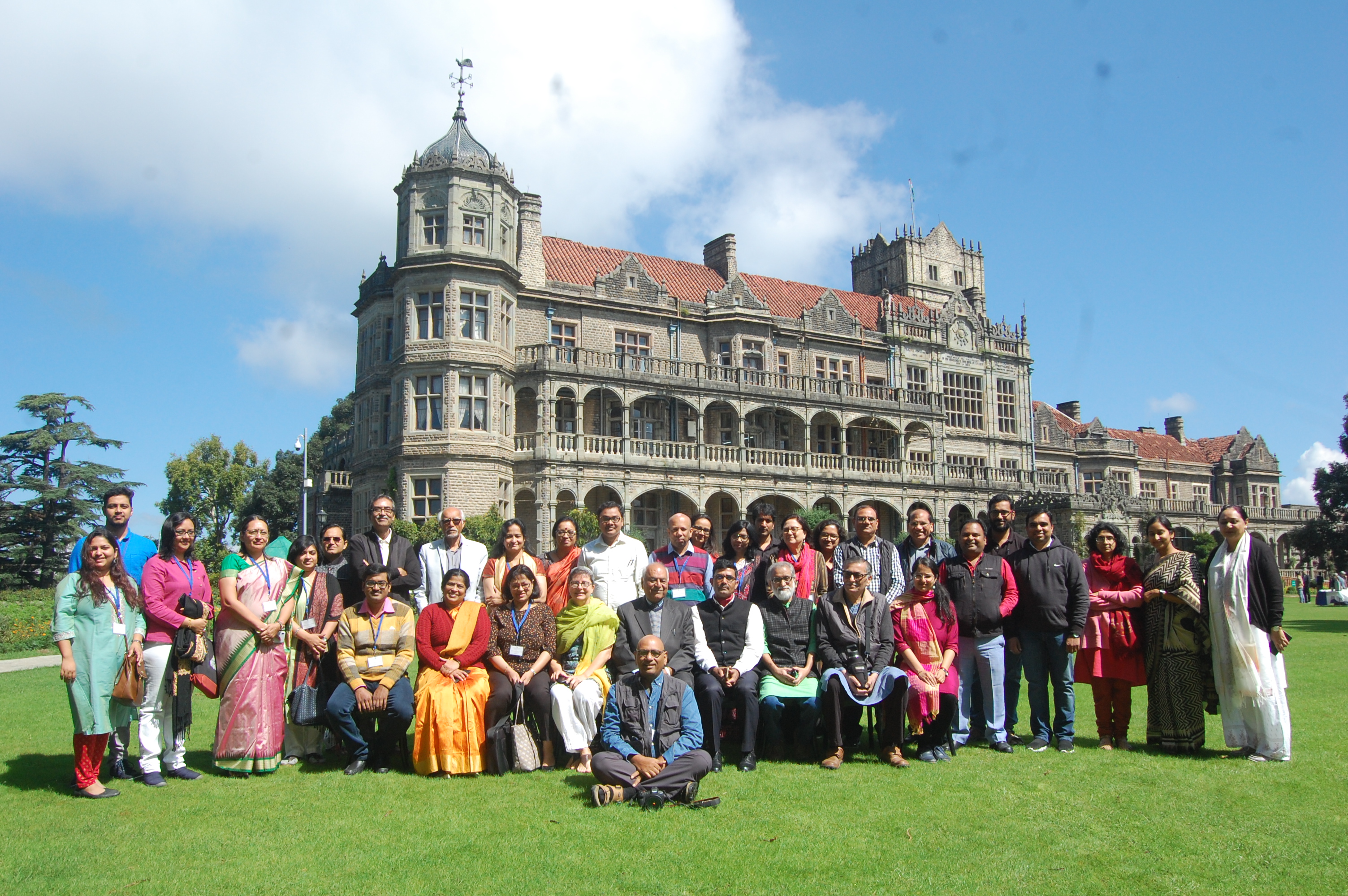 CFP Kala pani Crossings #2: Diaspora and Gender across the Indian and Atlantic Oceans 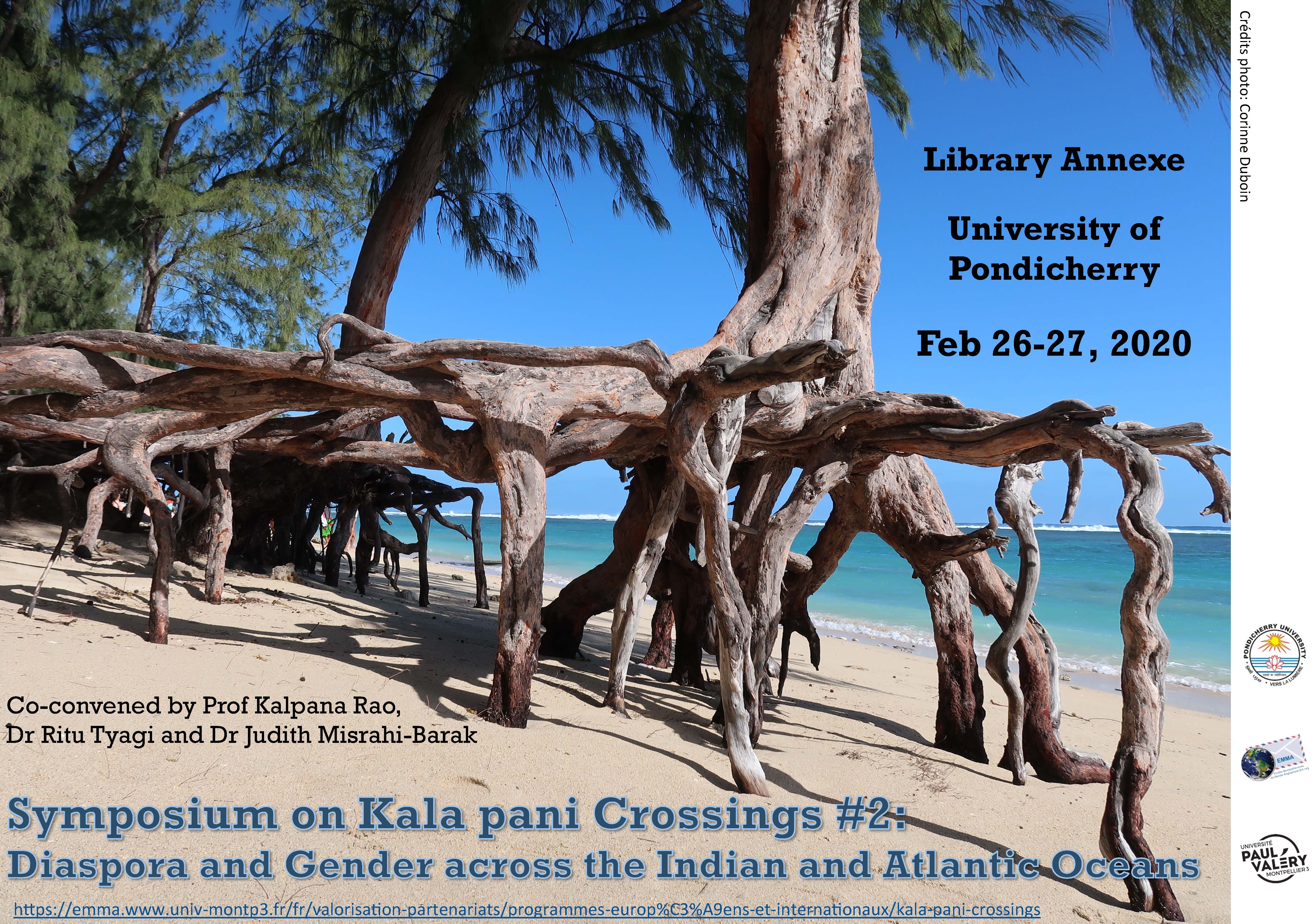 This symposium follows up on the seminar ‘Kala pani Crossings: India in Conversation’ that was held at the Indian Institute of Advanced Study, Shimla (September 23-25, 2019). Kala pani Crossings #1 had meant to throw more light on the 19th century migrations from India to Fiji, Mauritius, the Caribbean and Africa, and to revisit the history from the perspective of India. Over one million Indians were transported between 1834 and 1917 to sugar colonies under the system of indentured labour in order to meet the demand for cheap, unskilled labour after the abolition of Atlantic slavery in 1833. Yet, it is a chapter that has been excluded from Indian history.

Kala pani Crossings #2 intends to focus more precisely on the gender dimension in the migrations and in the historiography. Initially, the recruits were predominantly male with very few females. Historians such as Brij V Lal (1984) and Gillion (1962) have recorded an unequal sex ration (3.3:1 for Mauritius and 2.2: 1 for Natal) that lead to numerous problems as the indentured labourers settled  in the colonies. As a result, eventually, efforts were made to enforce more recruitment of women in the ratio of around 40 women per 100 men (Tinker 1974). Women, therefore, came to constitute an important section of the migrant indentured population that was transported from India. Colonial history as well as migrant discourse, however, tend to omit references to women migrants and their experiences. Women have been homogenised within the largely androcentric master narratives of their male counterparts. It is the feminist scholarship and its specific interest in diaspora and migration studies that has excavated the feminine narrative and emphasised the fact that the gendered dimension of migrant experience cannot be overlooked or downplayed.

This symposium is particularly interested in exploring the intersections of diaspora and gender within the diasporic and Indian imagination in order to investigate the ways in which race, class, caste, gender, and sexuality intersect with concepts of home, belonging, displacement and the reinvention of self.

Its aim is to comprehend
- if diasporic locations/positions marginalise women by alienating them from their home, or empower them as they emerge from nationalistic narrative to a transnational experience, allowing women to problematize/rethink home-host dichotomy;
- the possibilities of negotiation or resistance, and how those possibilities are determined by race, class, caste, or ethnicity;
- how the traditional standards of Indianness and gender relations were reshaped through the diasporic experience, as well as the impact such a reshaping had, if any, on the subcontinent;
- what can be gained in India by theorizing diaspora through a feminist framework;
- what it can mean for contemporary Indian women to look at the dynamics of racial and cultural formations in the diaspora, and to learn about the alternatives to the Indian norms of gender, patriarchy, class and caste;
- what kind of connections, dialogues, and solidarities can be conceived today between the Indian women at home and their diasporic counterparts.

This symposium will also offer a platform for discussions on how women writers from old diaspora and their literary texts assert and negotiate multiple ideas of home, multiple ways in which gender impacts diaspora to create spaces where normative practices can be challenged in favour of individual experiences, and multiple strategies to engender fruitful and dynamic connections today between India and its old diaspora.

Interested scholars are invited to submit a 300-word proposal and a short bio (150 words) for a 20-minute paper to the co-conveners of the symposium by November 15, 2019:
kalapanipondicherry@gmail.com
Notification of acceptance will be given by December 15, 2019.

Travel and Accommodation:
Speakers will have to find their own funding for travel. Accommodation will be arranged for outstation paper presenters, if intimated in advance.
Working lunch and local hospitality will be provided.

This first seminar of the Kala pani Crossings series at the prestigious Indian Institute of Advanced Study will be the perfect occasion to engage intellectually and launch an academic conversation between India-based scholars and scholars in the diaspora from a comparative perspective, to examine the hurdles and challenges, to investigate the reasons behind such a neglect and uncover new research directions:

Such a seminar will encourage an academic conversation between India-based scholars and scholars in the diaspora that has never happened in India; it will revisit the historiography and how such crucial history has been constructed on both sides of the Indian Ocean.

Many internationally known scholars have been thinking along those lines even though they have been focusing on the diasporic dimension of the Kala Pani crossings, but the conversation has never happened in India and never from India’s perspective. With such a seminar a think tank could be constituted, thus enabling the stretching of our multidisciplinary perspectives.

The seminar will also be significant in the way it will bring together prestigious scholars based in India and in the diaspora.

Notification of acceptance by the co-convenors will be given by mid-August. An official letter of invitation will then be issued by IIAS once the selected proposals have been approved and before tickets can be purchased. Travel expenses in India will be reimbursed by IIAS and room and board will be provided during the seminar.